Ever since we started studying insects this school year, the kids have all been actively searching for critters in our yard. Grashoppers, crickets, bees, mantids–you name it. If it crawls, creeps, or flys, they’re interested. We have a lot of butterfly bushes, which of course attract…butterflies!
Today as we were enjoying our picnic lunch in the backyard, Curly Girl spotted a yellow butterfly caught in a spider web high above our heads. She tried to call it by a scientific name, although I have no idea what she said. It was pretty cute, though, and showed me that the younger girls do actually pick up on what I’m teaching the older kids through osmosis. 🙂 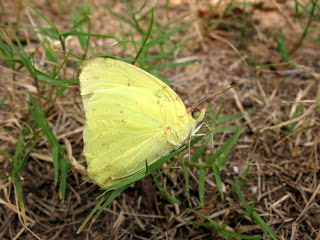 Anyway, everyone wanted to save the butterfly, so I found a long, thin stick with which to pull down the web. The butterfly came down quite easily, but then just lay on the grass. The kids wanted to touch it, but I told them to just let it rest for few minutes in case it was all worn out from fighting against the web. Mickey is fascinated right now with compound eyes, so I tried to get a close-up picture for him. 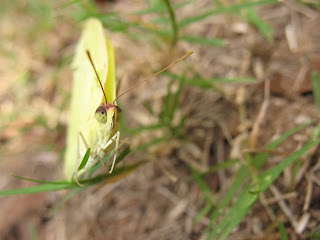 I would glance over at the poor little thing every few minutes, and I really thought it was dead. After about 20 minutes I finally walked over and gently scooped it up off of the ground. It immediately began to flutter its wings, and I think it surprised itself to discover it could still fly. 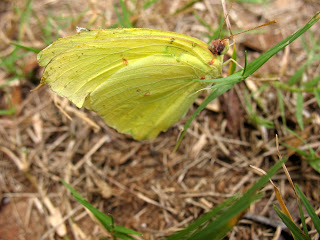 The kids all began to clap and cheer as the pretty butterfly flew away. Higher and higher it soared until it was lost among the tree branches. We used one of our field guides to identify it, and as close as we could tell it’s a Clouded Sulphur (Colias philodice). 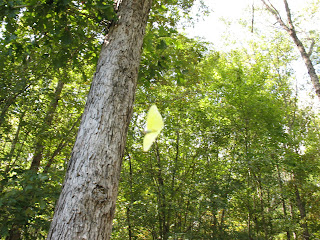 If my kids were at a traditional school today, instead of homeschooling, I wouldn’t have had the opportunity to be a part of their discovery and see their faces light up with joy as they rescued the butteryfly. Backyard schooling is a blessing. 🙂