I was a bad mom on Father’ Day. I completely forgot to take pictures of the kids with their dad and his dad. I actually did remember, but it was in the middle of the 11:00 service while my husband was preaching. Not such a good time for a photo op, and then it never crossed my mind again.

We did something special this year at our church to honor dads. Each person was asked to bring a picture of their dad to display on the walls around the back of the auditorium. It was so much fun to look at all of the pictures and try to figure out who was related to whom. Here are a couple of the displays along with some grainy copies of the pictures I put up.

This is my dad holding me when I was a chubby little baby. I’ve always called him Papa. He’s 79 years old now and lives in northern Florida. The kids and I got to talk with him on the phone on Father’s Day.

My Grandpa Smith (my dad’s dad) passed away a few months after I graduated high school. I spent a lot of time with him during my teenage years. He would let me drive his Jeep around the pasture while he put out hay for the cows. This picture was taken in front of the cow pens on our property. (Where is my shirt??!!) He was a sweet, sweet man.

My Grandad Hartt (my mom’s dad) battled cancer and passed away in 1983 when I was seven. He trusted Christ as his Saviour not too long before that. I wasn’t around him very often, but I remember watching wrestling or boxing on T.V. with him when we would visit him.

I don’t think that most dads get the same attention showered on them for Father’s Day that we ladies get on Mother’s Day. I have to admit that I am guilty in this area and need to do a better job letting our family’s special men know how much we love and appreciate them. I am very thankful for the great men who have had an influence on my life, and my kids are blessed to have a dad who loves them and takes such good care of them. 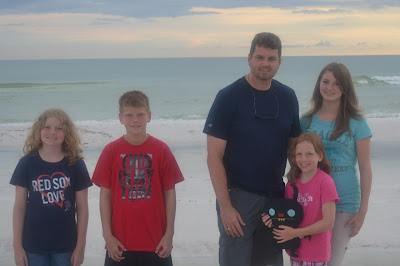