Our dogs spent the day at the groomer’s. Every time I went outside today and didn’t see them I would wonder where they were; then I would remember! Who says that only senior citizens have “senior moments”? 🙂

Dewey received a nice medicated shampoo bath and had his ears cleaned. Wrinkle care is important for English Bulldogs. Dirt and moisture can build up in those cute wrinkles and lead to a nasty infection. Dewey joined our family almost 4 months ago, and thankfully he hasn’t had any skin problems yet. We’ll see how he does this summer when it gets really hot. I have a feeling he’ll be spending afternoons sprawled out on the family room floor enjoying the air conditioning. In case you’re wondering why we don’t bathe him ourselves, just remember that he weighs close to 100 pounds and has feet the size of a small cow. Enough said. 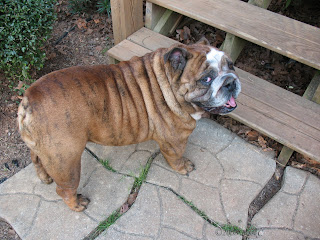 Buddy, our mini schnauzer, fares best with a puppy cut. He spends so much time romping in the woods with the kids that it just doesn’t make since for him to have a traditional schnauzer cut. He looks so skinny right after a haircut. 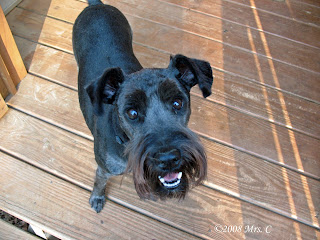 When Dewey and Buddy came home this evening the kids ran to them like they hadn’t seen them in weeks. It had been, in fact, only six hours. Even a short absence makes the heart grow fonder. Those good-smellin’ dogs were smothered with hugs.

Grooming the dogs does cut into our budget a bit, but I think if you’re going to have pets then you should take good care of them! Dewey and Buddy are looking and feeling great tonight, but I’m sure that as soon as they head out to play in the morning they’ll be looking green again from all of the pollen. So much for that spring cleaning. 🙂