I headed out in the pouring down rain to cast my vote today. In the future I will most definitely vote by mail or participate in the “early vote”, which in our area took place last week.

For the first time in my life I voted electronically. When I lived in Florida I had to use the old “fill in the circle with your pencil” ballot. S0, today I felt high-tech. I’m sure that most states already use the computer-voting system, but it was fun for me to be introduced to it today.

I was able to spend some time with the children today explaining our system of government and what a privilege it is to be able to vote. I also told them how important it is that we make wise choices when casting our vote. I told them that while, most likely, not every candidate I voted for is a Christian, I still voted for the most moral, conservative candidates on the ballot. Since we don’t have a T.V. in our home, we haven’t been subjected to the deluge of the liberal media.

I think that our children often take the freedoms we have for granted. I know I did when I was a child. I’m sure that we will enjoy doing a unit study on the election process in ’08 –if the Lord tarries! 🙂 They will be a bit older and more understanding in two years.

As I’m typing this, it’s 7:03 on the East coast, and the polls have closed. Those of you in the West still have time to cast your vote.

P.S.–Isn’t my voting sticker just PEACHY! :o) I asked the voting attendant if I could have a few of the stickers to take home to my kids. She really hesitated before answering me. I was thinking, “Come on, it’s just a sticker. Do you really think you’re going to run out of them today?” Finally she said she thought it would be o.k. Whew! I would have been in some serious trouble if I came home without stickers! 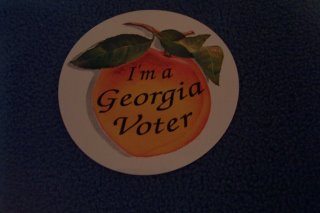