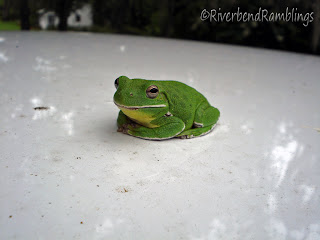 A few days ago Steven spotted this cute little green frog on top of my truck. I, of course, wanted to take a picture of the little guy (or gal). I opened the passenger door, climbed up, stretched my arm out as far as it would go, and snapped a picture. Steven tossed his baseball cap up on the hood in an attempt to gently nudge the frog a tiny bit closer to the camera. Well, the frog decided to take a two feet leap from the center of the hood and landed on my neck! I could feel one leg on my face and the rest of him attached to my neck. I let out a blood-curdling scream, the frog released its death grip, landed with a soft thud on the driveway, and quickly hopped into the nearby bushes. Needless to say, my husband laughed so hard he cried. He probably wouldn’t have found the scene quite so funny if I would have toppled from my precarious perch. After I recovered from my fright, I had a good laugh, too. Next time I’ll think twice before going in for a close-up. That’s what Photoshop is for. 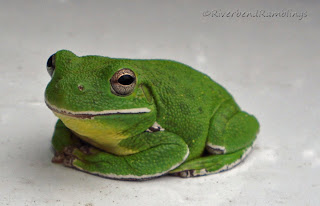