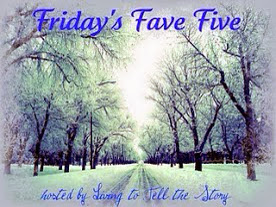 Here we are at the end of the first month of 2014. I hope the next eleven months don’t go by as quickly as January has! I’m ready to link up with Susanne at Living to Tell the Story and share some good things from my week.
1. Each year we have a very special “big day” at our church. We invite as many folks as we can and have a huge party on the football field after church with games, inflatables, and free food for everyone. The goal of this big day is to get the gospel out to as many people as possible. We had good weather, terrific volunteers, many visitors, and everyone (especially all the children) had so much fun. We had 3,219 in attendance on Anniversary Sunday, and, best of all, over 300 people trusted Christ as their Saviour. I was busy running around most of the morning, so I had a chance to snap one quick picture. This is the 3rd, 4th, and 5th grade children’s church. I think there were over 325 kids in this class alone, and we had classes for every age group all around the property. I’m thankful for our church! 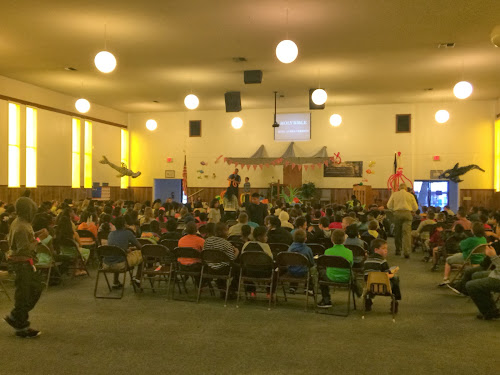 2. While most of the South experienced bitter cold and even snow this week in areas that rarely get any, we were spared freezing temperatures here in central Florida. I read so many reports of people in Georgia, Alabama, and other states being stranded away from home and of children stuck on buses or in school buildings due to the weather. I cannot imagine how scary that would be. I’m glad that I have a warm house and a cozy bed to sleep in tonight.
3. Hope’s basketball team won a game this week, and Hope scored two points! Her team is made up of 6th, 7th, and 8th graders who were all first-time basketball players this year. A couple of months ago, the girls didn’t know one end of the court from the other, but they have worked hard and have improved tremendously. Their coach has to be one of the most patient men on the planet. He had to start from scratch teaching them the basics, so he deserves a lot of credit for what the girls have accomplished. They have two games left, and then the season will be over. 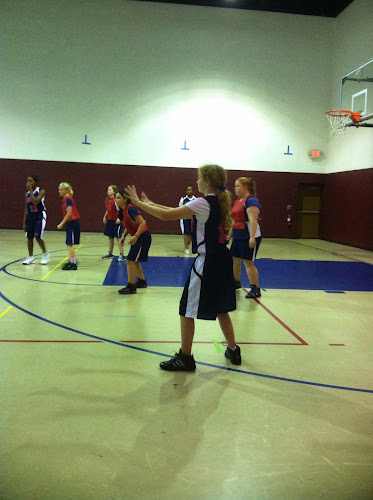 4. All four of the kids made the Honor Roll at school. Bryn, Hope, and Shay all made straight A’s, and Case had all A’s and B’s. We don’t expect our kids to have perfect grades, but we do expect them to do their best. God blessed them all with good brains, and I’m glad they’re using them.
5. Steven and I had a chance to visit several antique stores in a small town a little over an hour from where we live. As always, I was on the prowl for vintage Pyrex. Several stores had pieces that caught my eye, but the prices were ridiculous. I about fell over when I spotted an Ivy Chip & Dip set (with the holder) from 1964. It was the first chip & dip promotional set that I had come across. Ivy is not one of my favorite Pyrex patterns, but I think it looks pretty on the Cinderella bowls. The price was reasonable, but Steven had to talk me into buying it because it was still rather expensive. The vendor ended up giving us a ten percent discount, so I walked out the door with rare set to add to my collection and a smile on my face. 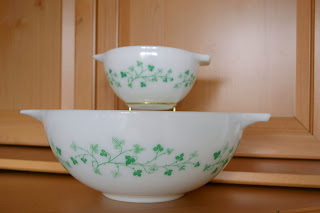