I had so much fun reading all of your guesses about this picture. Some of you thought I was having a really bad day, and some of you thought we were going to get a puppy for Christmas. With six people, a dog, and a cat living in our house, do you really think we need another pet?

Well, apparently my darling husband thought we did. 🙂

The cute little dog in my last post is not our new dog. But, it looks a lot like the newest member of our family. If it were up to me, we would not have added another pet to our home. However, my hubby’s eyes lit up like a little kid on Christmas morning the first time he saw this dog. I think he had tears in his eyes. I have such a wonderful, loving husband; how in the world could I deny him a chance to have the dog of his dreams? 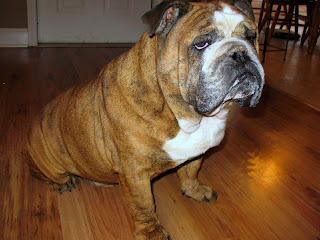 Dewey is a 5 year old pure blooded English bulldog. These dogs are expensive around here (you know–the GEORGIA BULLDOGS) and usually sell for $1,000-$2,000. Dewey has been “fixed”, and we have adopted him from a doggie foster family. He didn’t cost us anything, unless you count the zillion pounds of dog food we had to buy. Did I mention he weighs 90 pounds? I’m not kidding. He’s going on a diet!

Dewey is just hilarious! He is very smart and acts like he knows exactly what you’re saying to him. When he eats, he sounds like a dinosaur; or at least what I think a dinosaur would sound like. If he hears the word “treat” he comes running to catch it. I think he swallows it whole. And the snoring! I have always been happy that I married a man who doesn’t snore. Well, you can hear Dewey snoring all the way across the house!

Although Dewey is house trained, the plan is for him to be an outside dog. We have a large fenced dog run with a big dog house just perfect for him. It’s in the 30’s here at night right now, so Mr. C wants Dewey to stay inside until the weather warms up. He’s actually very well-behaved and loving, so I don’t mind him being inside.

Buddy the schnauzer and Sassy the cat are not sure what has invaded their home. Buddy has been barking at Dewey all day, and Sassy just peeks at him from time to time. I think that if we put Buddy and Dewey outside together for a couple of hours Buddy will get over his anxiety. Dewey is very friendly to Buddy and Sassy. Hopefully they’ll adjust in the next few days. 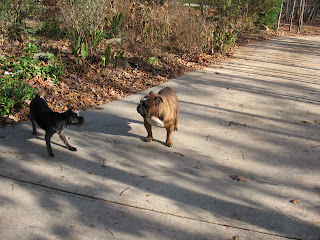 Our children, who are still in Florida, don’t have a clue about Dewey. They are going to be so surprised when they get home and see him. The family Dewey lived with had several children, and Dewey just loved to snuggle and play with them. I think Dewey is going to fit in just great in our family.

For those of you Florida people who read my blog and will see my kids in the next few days let me warn you: NOT A WORD about Dewey!!! They will be coming home at the end of the week–I can’t wait!

And yes, Mom, I know exactly what you’re thinking. 🙂