Happy Monday, everyone! I hope you had a great weekend.

I spent most of Saturday preparing for Mr. C’s homecoming; he had been gone out of state to a preacher’s meeting most of the week.

Friday night I kept the kids up late with popcorn and one of our favorite movies, The Fox and the Hound. I thought that they would sleep in on Saturday morning and I could get a head start on my house cleaning. Yeah, right!! A few minutes after seven I could hear Curly Girl and Mickey Mouse playing away. I gently reminded them to play quietly. Well, despite the warning, a few minutes later Lil’ Nut came toddling out of her room begging for her breakfast. So, by 7:30 I was working on pancakes and bacon. I’m not sure what I did wrong when mixing the pancake batter, but apparently I added too much liquid, and the pancakes were a flop! Thankfully I had a box of nutritious pop tarts stashed in the back of the pantry.

Later in the morning I decided that our mini schnauzer, Buddy, just had to have a bath. He has finally outgrown the laundry room sink, so I took him out on the driveway and used the water hose instead. It worked like a charm! He didn’t squirm at all like he usually does. What a blessing! It was the most effortless bath I’ve ever given him!

The day kind of dragged on like it will when you are anticipating something wonderful, which is what Mr. C’s homecoming was. He rolled in around 3:00, and the kids and I were so happy to have him back home safely. We spent a couple of hours relaxing and then headed out as a family for bus visitation.

As Bookworm was walking around the side of our house, she let out a blood-curdling scream. She came running and screaming, “There’s a snake! It’s under my window, and it’s got its head raised up!” She described the pattern and size of the snake to me while Mr. C quickly went to see if he could find it. As he was walking back toward the rest of us, he suddenly spotted it. He ran and got a hoe, and that was the end of the snake! As it turns out, it was a timber rattlesnake. We were so thankful that the snake was raised up so that Bookworm could see it and not step on it! We called the other kids to come and look at it so that they would be alert when playing in the yard. 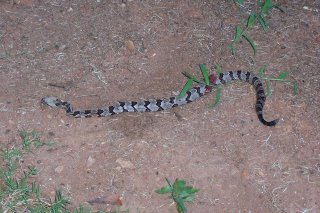 Thankfully, the rest of the evening was uneventful!

The Lord blessed our services on Sunday; we had 4 new children ride the bus, and I had 11 little ones in my Sunday school class. Mr. C preached a great message Sunday night. I missed the morning service since I filled in for one of the Jr. Church workers, but I plan on listening to the tape of the sermon during my ironing time later today.