Of my four children, Curly Girl is the toughest when it comes to getting sick or hurt. She hardly cries at all and never complains when she’s sick. It’s been just about a year since she burned her arm, and this summer she was stung over 30 times by ferocious yellow jackets. I didn’t even blog about it when it happened. Too much drama!

Anyhoo, yesterday afternoon Curly Girl was playing on the floor in her room and split her eye lid open when she bumped it on the edge of the bed. I didn’t even realize it was split at first, because there wasn’t much blood. I laid her on my bed and debated what to do next. My husband was preaching a funeral service about 50 miles away, so he wasn’t here to help. This was one of those times that I really miss having my mom and mother-in-law just a few miles away. I can still call them on the phone for advice, but they can’t hop in a car and drive over to watch the other kids while I run one to the E.R.

I made up an ice pack for Curly Girl, and she held it on her eye…for an hour! I couldn’t believe how tough she was. I told her that if her face felt too cold that she could take the ice pack off for a while. She replied that it felt just fine. She’s such a trooper! I called our pediatrician’s office, and the nurse told me to bring her in. She said that I would have to leave the other three kids out in the waiting room because their office policy doesn’t allow more than one child in the exam room. Well, I didn’t feel comfortable about leaving my kids unattended in what I knew would be a very crowded, crazy waiting room, and I prayed and asked the Lord to give me wisdom to handle the situation the right way.

As I pulled in to the parking lot of the doctor’s office, guess who pulled in at the same time? My hubby! He was able to give hugs and kisses to Curly Girl before taking off with the other kids. An hour and a half later, we were finally seen by the doctor. He carefully examined Curly Girl’s eye to make sure that there was no damage to the eye itself. He felt that steri-strips would work just fine to close the cut, and I was very relieved that stitches weren’t needed. 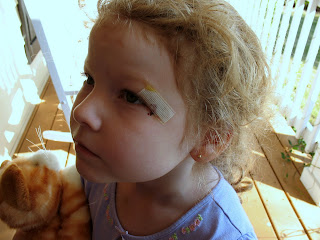 I dropped Curly Girl off at home in time to turn around and head back to the church for our monthly ladies’ fellowship. I enjoyed a sweet time with the ladies and gave a short devotional on thankfulness. With the earlier events of the day behind me, I was in an especially thankful mood. After the meeting was over I stopped by the grocery store to pick up a few needed things. I don’t like to go to the store at night, but with gas here right at $3 a gallon, multi-tasking when I’m in town is a necessity. I love my Suburban, but it sure is a gas-eater! I was one tired momma when I finally arrived home at close to 10:00.

I wasn’t that surprised when I woke up this morning with a sore throat and a headache. We cancelled school today. The kids played together and drew me some pretty pictures. By late morning I felt a bit better, so I decided to clean out the little girls’ closet. Completely. I took everything out. There were too many outgrown clothes and shoes in the closet–even my wedding dress was in there. The closet is long and very narrow. I’m going to look for an extender to make better use of the space. 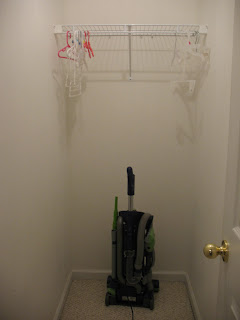 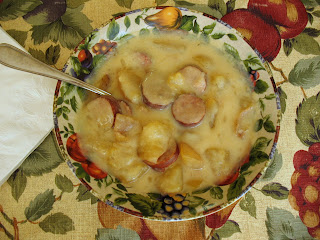 I left that big mess in the middle of the girls room, and off to bed I went for a long nap. Mr. C fixed supper while I was resting: fried chicken and pizza. 🙂

The headache is just about gone, but the sore throat is lingering. I’m going to take some more herbs, turn in early tonight, and pray for healing. I haven’t told the kids yet, but tomorrow will be another “sick day” for their teacher. I think they’ll be rejoicing in the midst of my discomfort. 🙂 We’ve had a bumpy start to our week, but I’m trusting the Lord to see us through.