Have you ever been scared by an animal? How about by a turtle?? This one scared the daylights out of me! 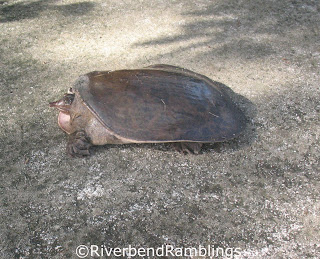 Lil’ Nut actually discovered it as we were leaving the house. Since the turtle was directly in the path of the rear tires on my ‘Burban, I couldn’t exactly go anywhere right at that moment. I ran back in the house and grabbed my camera. I figured we might as well fit in a science lesson before I “helped” the turtle out of the way.

Lil’ Nut: “It is NOT a turtle! Turtles don’t jump, and I saw it jump before you came out here when Buddy was barking at it!”

(That explained why the dog had been barking non-stop for the past 20 minutes.)

After putting Buddy in his kennel so that I could hear myself think, I slowly walked toward the turtle. He looked kind of mean and was about 18 inches long. As I squatted down to take a picture, the critter jumped right up off the driveway landed a few inches forward. He didn’t just scoot, he jumped. I jumped, too, and screamed. 🙂

She was right. I’m pretty sure that it was a Florida Softshell (Apalone ferox). This species is pretty aggressive, and when they stick their heads out of the water they look like baby alligators. There are a ton of them in the pond behind the house.

I decided that I didn’t want to be too close to Mr. Turtle after all. As I debated about grabbing a stick to help prod him out of the way, he took off at a brisk pace toward the pond. 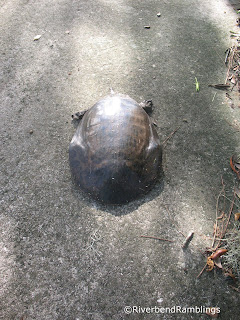 I learned something new today; turtles can jump. Maybe that’s how the tortoise beat the hare. 🙂